If you are like me, every morning you are deluged by emails from people and companies whose products you have either browsed or purchased.  I have a filter program which allows me to quickly unsubscribe if I want, but there are some I'm addicted to looking at!  And I'm always interested in what new products are being presented.

I couldn't resist clicking on the link to see what on earth a "stamper's secret weapon" might be.  I'm not much of a stamper, but curiosity is something I was born with.  Lo and behold, I found a product that is -- I'm sure by accident -- perfect for parchment craft!  It is shown to the right of this post... and I found it at Amazon.

This pad is soft on one side (can be used for embossing) and has a surface on the back side that can be used for perforating.  Now, please understand that this is NOT the professional grade product that I sell from PCA in my ParchmentCraftUSA.com store... but it is something you can toss into your bag or your car to have handy for emergency parching while you're waiting for someone, or keep in your bedroom for late night parching practice if you are a beginner as I certainly am.  And if it gets beat up with this new use, you haven't broken the bank!

Of course it is a perfect surface for stamping (what it was designed for) but since my mind is always on parchment craft lately, it was a "eureka" moment for me.  I'm going to try to get this product into my store, but if you want one for now, please click on the Amazon link at the right... and of course, I'll get a tiny commission.  It's lightweight and easy to handle, and is even a good surface for the adult coloring that everyone seems to be doing these days,

Get one and try it!
Posted by Unknown at 9:06 AM No comments:

My grandmother only knew how to make one kind of cake.

When I was very small, she kept me while my mother worked as a substitute teacher.  It was World War II and all the male teachers had been drafted.  These were long days for a three-year-old and I'm sure I was a burden for my grandmother as she went about her daily chores.  This house was in the country, so there was a garden to tend and eggs to gather. I would churn butter for her in a wooden churn that was nearly as tall as I was, and crawl under the house for her to help find eggs the chickens had laid.   But once in awhile she would make a cake.

My grandmother's cake was a yellow cake, with flour, baking powder I guess, one egg, and sugar. Her frosting was always a thin, crusty mixture of sugar and water, maybe an egg white, with pineapple chunks mixed in.  It was a very, very sweet cake.  But when she mixed the batter, she'd ask me to help stir in the mixing bowl, which was a large green crock.

My mother ended up with many of my grandmother's dishes, and when she herself went into a nursing home a few years before her death, I asked her if I could have that green crock.  It was far back in the cabinet in her kitchen, and although it had been occasionally used to make cornbread and such, it was not going to be used anymore. She said yes, so I took it to my home in Houston.

Somehow after it came into my possession, it got broken.  Sixty-five years of use, at least, and in my house it got broken!  I was heartsick.

I saved a piece of it, which amounted to half the bowl, vowing to do something with it one day.  I tried making a painting of it, but that wasn't really preserving it and I was terrified that the piece I had left would get broken or lost.  I hung onto it.

Now, years later, I have come up with the solution, and I am happy to share it here. 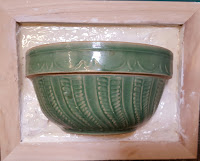 I mounted it on an 11x14 wooden frame, by pouring plaster of Paris around the base. I added some modeling paste on top of that, and when that dried, I added a leveling product to fill in cracks.  I thought of making it into a planter (and I still might) but for now, I cut a piece of styrofoam to fit inside for artificial flowers. 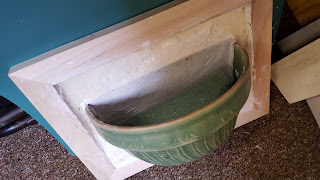 I was going to buy flowers from Michael's, then I remembered, hey, I can make them!   I wanted large ones.  I looked on YouTube for ideas, but the only large flowers anyone was talking about were HUGE flowers -- not what I meant by large.  I finally scanned one of my flowers from one of my favorite punches, enlarged it to the size I wanted and cut it on my Force in two colors of yellow.  In my studio I still had stamens and stems from flower making several years ago  (that's why I keep everything within reach!) and gradually remembered how I did it.  I avoided using the glue gun, and tried other ways of putting them together but I think it's going to take the glue gun after all because they don't stand up exactly the way I want.  And I may add some greenery.

The last thing to decide was how to finish the frame.  I decided I wanted the entire focus to be on the crock itself, so I painted the frame and the plaster background the same creamy color,  similar to buff titanium.  The flowers, in yellow, are just perfect for this project.

The wood frame, with the heavy crock and even heavier plaster, will be difficult to hang and a plain old picture hanger was not going to work so I settled on large eye-hooks and a chain for hanging.  I was going to add a wooden support across the bottom but I don't think it needs it. If this comes apart someday after I'm dead and gone, I hope my granddaughters will value this enough to fix it.  It wouldn't be difficult.

This is my way of paying tribute to the memories I have of people who are now gone.  I have something beautiful to see every day.  In the last photo, and behind the crock in the frame, is a milking stool my granddad used during those same years.  I sanded that and painted it pink.  It now holds live ivy which adds even more to my studio.

I don't like visiting cemeteries.  I much prefer to surround myself with pleasant reminders of simpler times. 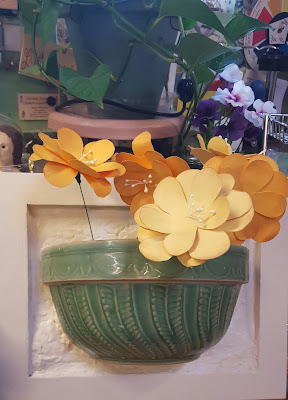 I love it!
But the flowers need more work.

Posted by Unknown at 8:45 AM No comments:

Get your own copy of Make the Cut

MAKE THE CUT Software is so far the best I've found!

If you cut or engrave,the KNK Force is an affordable alternative to a laser engraver.